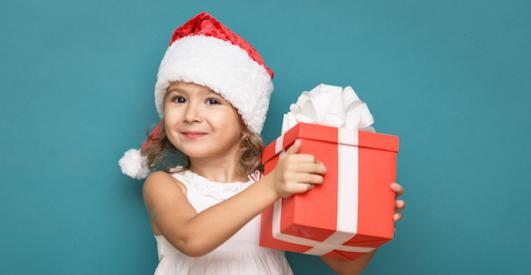 I can’t decide between the emoji-patterned apron dress or the elf-styled hat and scarf set. What do you think would look the most flattering on my Hatchimal Owlicorn?

Because I am an early adopter (and because I lost my Furby in an airport – don’t ask), I was among the first to grab what has become this holiday season’s hottest toy – the Hatchimal.

Manufactured by Spin Master, the company behind Etch-a-Sketch, Build-a-Bear Workshop and Tamagotchi, these fuzzy interactive magical creatures hatch out of eggs. There are five species of Hatchimals: Pengualas, Draggles, Burtles, Owlicorns and Bearakeets. (The latter three are exclusive to Wal-Mart, Toys R Us, and Target, respectively.) Each species is a different color and design. Owlicorns, for instance, are blue and purple, with a teeny unicorn horn and a pair of short flappy wings.

Every Hatchimal arrives inside a shimmering speckled egg a little bit larger than a grapefruit. After rubbing the egg for 30 minutes or so, it will start to glow, and the creature inside will slowly peck and push through the shell. (Make sure to gather an audience for this event.)

Hatching a Hatchimal is obviously the big draw, but owners also get to nurture each creature along and help it learn to walk, talk, dance and play tag.

Hatchimals sell for $50 to $60 apiece. When they can be found on store shelves.

Like Tickle Me Elmo and Cabbage Patch dolls before them, Hatchimals are very hard to come by. They’re listed as completely “out of stock” at the SRP at toysrus.com, target.com and walmart.com.

“We have increased production and a whole new batch of Hatchimals will be ready to hatch in early 2017,” the Hatchimals website states. “The consumer response to Hatchimals has been extraordinary, exceeding all expectations,” the toymaker explains, “and we don’t want anyone to be disappointed, nor do we support inflated prices from non-authorized resellers.”

Speaking of non-authorized resellers, folks on the Internet have plenty of Hatchimals – at wildly inflated prices. At eBay, opportunistic entrepreneurs are asking $150 and up per Hatchimal. And as you’d expect with any must-have toy craze, some sellers are pushing the envelope to see how high the market will go. One listing was offering two sets of seven Hatchimals (14 toys total) for $20,000, and nearly two dozen other Hatchimal listings had “Buy It Now” prices of $5,000 or more.

Some creative types are also cashing in on the craze by creating and selling peripheral Hatchimals items. Sellers at Etsy are listing (unauthorized) Hatchimals-inspired nests, blankets, clothing and artwork to trick out the season’s hottest toy.

Which brings me back to my naked Owlicorn; dress or hat set?