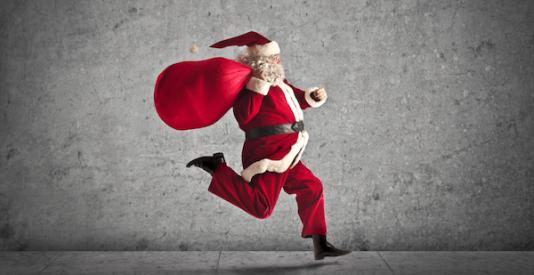 Of any Shopper Moment in any store at any time, none is more universal or more meaningful than the experience of sitting on Santa’s lap.

I still relive that memory. Weekly. With a therapist.

But for most, the recollection of sharing a wish list with the big man in red maintains its warmth and enchantment. And that, I firmly believe, is because those folks got a good Santa.

A good St. Nick is rosy-cheeked and welcoming and doesn’t smell like soup. He also doesn’t mutter under his breath or yell at his elves or have sticky hands. A good Santa has skills.

I recently made the acquaintance of a gentleman who works seasonally as a retail Santa. His civilian name is Walter, and he’s been piloting the candy cane throne for almost nine years. Walter has skills.

Here’s what he had to say about being a good Santa:

Children will invariably ask a lot of very specific questions. “Who is Krampus?” “Why do you go down chimneys instead of through the front door?” “Why are there Santa Clauses on every street corner downtown?” The tyke is interrogating you to see if you’re the genuine article.

Do some reading beforehand. Check out Wikipedia. Work on your background story. Learn a few interesting facts that you can impress tots with. (For instance, did you know that Santa started appearing in red and white in the mid-to-late 19th century when he appeared in Coca Cola advertisements? Until then, Santa wore all-white, green or other assorted colors.)

A common query is, “Are you the real Santa?” I usually respond by saying, “I’m the spirit of Christmas, and I stand for love and giving.” I have yet to receive any follow-up questions to that response.

Know how to sing.

To fully portray the jolly old elf, you’ll have to sing. Start with learning the words to “Rudolph the Red-Nosed Reindeer.” If you know that song, you’ll also know all the reindeer names.

Never arrive in your own car. Park in the lot farthest away, get dressed and then have a helper drive you to the affair. When the kids ask where the reindeer are, just say they aren’t allowed on the premises.

Take breaks when you have to, but use them to your advantage. Get up and walk the crowd. Go and greet those in line, warm up and get a feel for the audience. Get a good look at any crying babies you’ll need to be ready for.

I have a Santa survival kit: water, wet naps, aspirin, Tic Tacs and Tums. I also make sure my helper has a towel at the ready. I’ve had many a two-year-old deposit all kinds of things in my lap.

It’s not very festive, but a smart Santa protects himself and his reputation. I always keep my hands in the picture. When I’m working with a professional photo person, I ask her to retake the shot if she doesn’t see my hands. I ask parents to lift big kids onto my lap.

I carry performers insurance. It covers up to $4 million in liability. Because I don’t want someone to sue me and take my ho-ho-home.

The most important part of the outfit is the beard. Too many times a cheap or poorly attached beard will ruin the illusion. First off, purchase or rent a high-quality beard. Use safety pins or small two-sided adhesive strips to make sure the beard doesn’t shift.

I use a theatrical beard. (A one-piece beard is not a good look because when you talk the whole thing moves.) I put deodorant on my face before I glue my beard so it doesn’t sweat. If they ask to pull the beard, I tell them I’ll cry.